Posted on December 17, 2015 by Alyson and Dave Sheldrake

Two of the main streets of Carvoeiro are now full of colour thanks to a new initiative which has seen the electricity boxes on Rua dos Pescadores and Rua do Barranco transformed into works of art.

The original concept of decorating the electricity boxes with street art came from Phil Francis aka ‘Phil da Bife’ last year and was supported by the freguesia – and after a lengthy wait the project was finally approved by EDP so that work could begin on decorating the boxes – which are traditionally a boring grey colour and often covered in posters or scruffy adverts.

With the help of a professional graffiti artist Helder José (aka ‘Bamby’ from Style Spectrum) they began to design and spray paint the boxes around the town, adding a bright splash of colour to hidden corners and streets:

We were lucky enough to meet Phil and Bamby hard at work on their latest designs using intricately drawn and cut stencils:

Phil is English/Portuguese and has lived in Carvoeiro for 27 years. He is evidently proud of both the town he lives in, its local people and customs, and way of life, as shown through the designs they have chosen to use on the boxes. Phil is also a trainee tattooist at Tattoo Studium in Carvoeiro and it is obvious that he is loving this project!

Bamby is German/Portuguese and runs his own company Style Spectrum (#stylespectrum_unlocked) specialising in art décor and graphic design.

The theme for the project is Algarvian life and the designs are often also based on Carvoeiro history, and they have also cleverly incorporated some images from Sr. Vasco Reyes’ monograph of Carvoeiro. The first box to be completed was this one, illustrating an Algarvian chimney so typical of the region:

This project has been sponsored by the Carvoeiro freguesia and Lagoa câmara and it is a really nice unique and colourful idea that can only benefit the local area. We had great fun walking the streets trying to spot them all .. beware some of them are quite tucked away!

There are stories attached to many of the images, including those of the illustrations of local residents and characters. The old lady in this image people say is ‘Tia Olympia’…

And the other fisherman’s name hasn’t been confirmed yet – so if anyone knows who he is .. do let us know!

One of the things we liked most about the project is the sensitive way many of the images and colours have been selected to fit into and complement their immediate environment, like this one outside the local hand-painted tiles shop:

And this one which matches the shop sign colours so well:

Phil hopes to have the first phase of around 55 boxes completed by Christmas and there is already talk of a Phase II which would encompass the Estrada do Farol – Lighthouse hill; and with all its colourful bars and cafés I’m sure that would give the lads plenty of ideas for new designs! 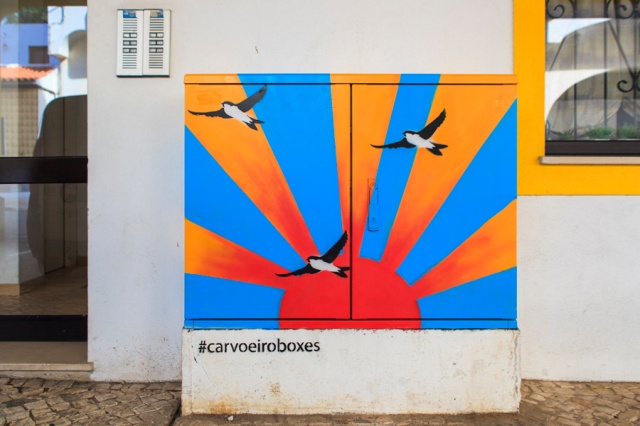 This is one of our favourite ones so far: 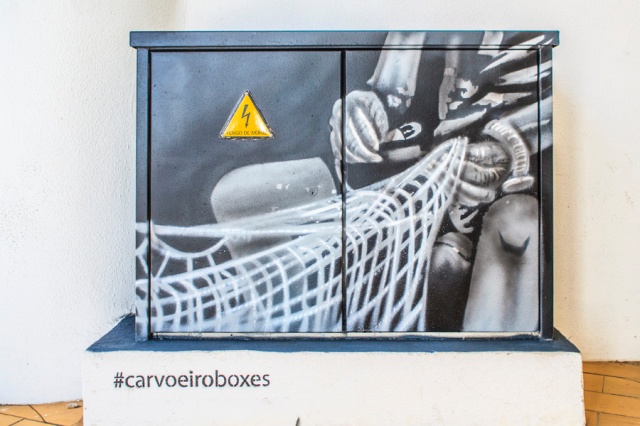 The artists have asked the public to help them by tagging any photographs taken and uploaded onto social media by adding the hashtag #carvoeiroboxes on Facebook, Twitter, and Instagram. 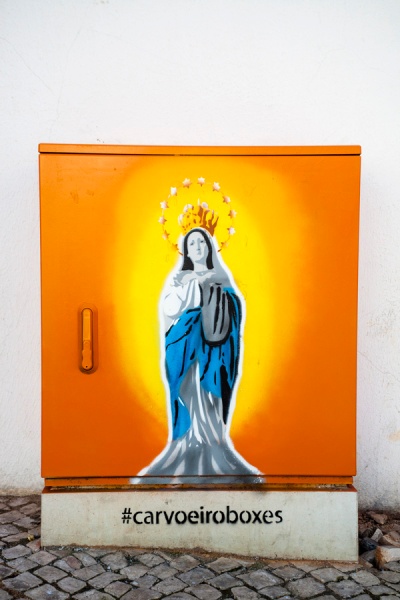 We would like to wish the lads every success with this project and thank them for brightening up the streets of Carvoeiro.

There are more pictures to enjoy in the gallery below – and do let us know what you think.

Click on any of the images below to start the slideshow.

This entry was posted in Art, Places to Visit and tagged art, Culture, exhibition, Photography. Bookmark the permalink.