Posted on January 8, 2014 by Alyson and Dave Sheldrake

Monday was quite a scary day – with the bad weather which was affecting parts of the UK also hitting the west coast of Portugal. The initial weather warning was a red alert for the western side of Portugal from Lisbon to the north – so we really didn’t think much about it down here on the southern Algarve coast.

We happened to be walking along Ferragudo’s harbour in the late afternoon when we looked out to sea past the breakwater and saw some pretty big waves! It was quite scary as they were actually bigger than the horizon – which was something we had never seen before. The water in the harbour was rushing in very fast, and we knew we were not even at high tide yet; the water was coming in the harbour in waves and it felt strangely ominous. Lots of locals were coming out to look at it too – so we decided to retreat to higher ground rather quickly! 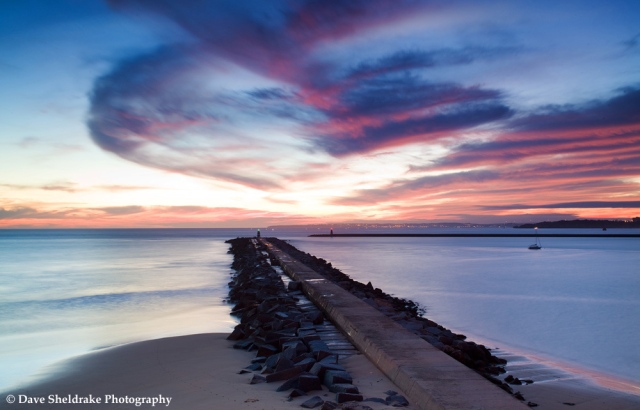 We headed up to park on the cliffs above Praia de Molhe, one of our favourite small beaches between Ferragudo and Carvoeiro, which is normally a favourite small beach for surfers offering a gentle stroll along the breakwater to the lighthouse. Lots of locals were already there at the car park at the top and the sight took our breath away – gone was the usual view of gentle waves lapping onto a golden sandy beach – instead the sea was ferocious, kicking up giant waves and storming onto the beach area, which was completely submerged. 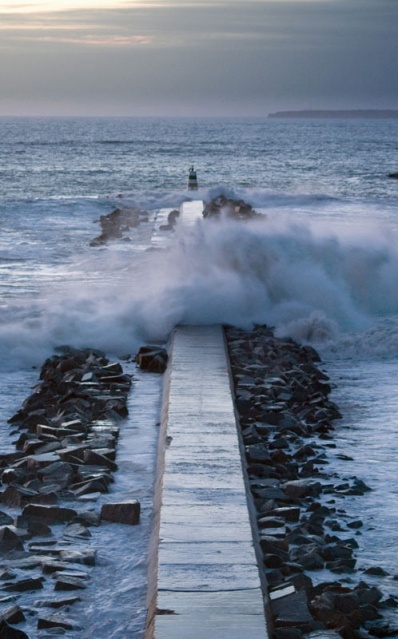 The waves crashing up onto the cliffs before they even reached the beach area were startling – we have never seen them so high before:

And then they continued to roll in – completely covering the lighthouse as they streamed forward – and flowing over the breakwater:

You can see the difference here between these two shots as the waves relented for a second in the shot above- until the next powerful one arrived in the shot below:

As it got dark and high tide approached, the sea seemed to turn even more menacingly strong, sending waves crashing right into the little beach café.

The waves caused damage across the Algarve, it seems that Armação de Péra, Carvoeiro, Praia da Rocha and Portimão were some of the worst affected areas – we could see the waves crashing onto Praia da Rocha beach from where we were stood on the cliffs:

It was a very sobering time standing safely on the cliffs but watching the immense power of the sea claiming land and crashing up the rocks of the cliffs below us. As it got darker the sound of the waves seemed to be magnified – there were a lot of local people stood watching on the cliffs – but no-one was speaking – all just stood in silence, witnessing an eerie and spectacular sight.

It wasn’t until morning that the extent of the damage was uncovered – the Portugal News have reported this in detail on their website – link here  – with information showing the debris and damage across many small coastal villages.

Here is the little beach café on Praia de Molhe beach this morning:

You can also clearly see the strength of the waves when you look at the breakwater this morning – the rocks that are now scattered across the walkway are giant boulders – they have been moved as if they were small pebbles: 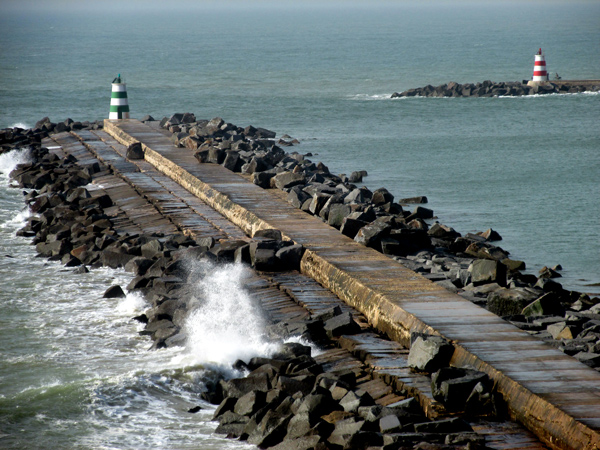 Although the bad weather had been forecast, it really did seem to take locals by surprise here – we have since discovered this really handy surfers’ website which has a great ‘wave simulation’ programme which will show you the strength of the forecasted waves for the next three days – it’s simple and effective – click here to view the site.

As the clean-up and repairs begin, we are saddened to see how much damage has been caused to small local businesses and beaches – and wonder how long it will be before our beloved little Praia de Molhe beach is back to normal:

If you would like to know more about the weather in the Algarve – when we don’t have unprecedented storm surges forecast – you might enjoy reading this post:

When to visit the Algarve

This entry was posted in Beaches and tagged beaches, Ferragudo, weather. Bookmark the permalink.