Eating out in Pedralva – Pizza Pazza

This is the third of our posts about Pedralva – if you missed the first ones you can click the links here to find out more about this fantastic place:

‘Pedralva – The village that was brought back to life’

On our second night at Pedralva we opted to try the other restaurant on site – the less formal Pizza Pazza – which we were reliably advised to book a table for – which seemed rather strange to us as the resort was very quiet – but at about 6.30 the cars started appearing and by 8.30 the place was full! There is a cosy inside seating area, where you can end up sat next to local people, surfers, business people from Lisbon on holiday – or if you are very lucky… Prince William; who has previously enjoyed a meal here whilst surfing nearby. They also have an upstairs outside terrace with more seating for you to enjoy the setting sun and magnificent views from.

The pizza place is very informal, and was open before the Pedralva site was even refurbished – which surprised us as we had wrongly assumed it had only opened since the 2006 plans began to take shape.

The menu was simple – and the wine choice even simpler – red or white in a jug! Our waiter described the red wine as “smooth, fruity and guaranteed not to give you a hangover!” There was a wide choice of pizza toppings but only three pasta choices for non-pizza lovers.

The menu has some fantastically named pizzas including the ‘Cannibal’ or ‘Jungle’ and even a matching ‘Tarzan’ and ‘Tarzan and Jane’ combo; and an amusing translation of house salad as “salad in the way of the house”

We ordered a herb and garlic bread starter, which was great – very well seasoned and flavoured – and it disappeared rather quickly! We also had olives and lupini/tremoco beans too. 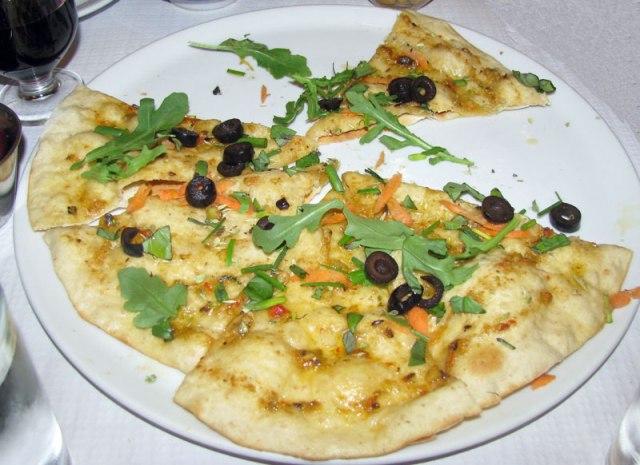 I had ordered a Tropical pizza complete with pineapple – and banana!

and Dave had a seafood pizza covered in anchovies and both came out piping hot and full of topping. Dave’s pizza was so big it overlapped his dinner plate!

One of our friends ordered the seafood pasta – which was freshly cooked and too hot to eat! 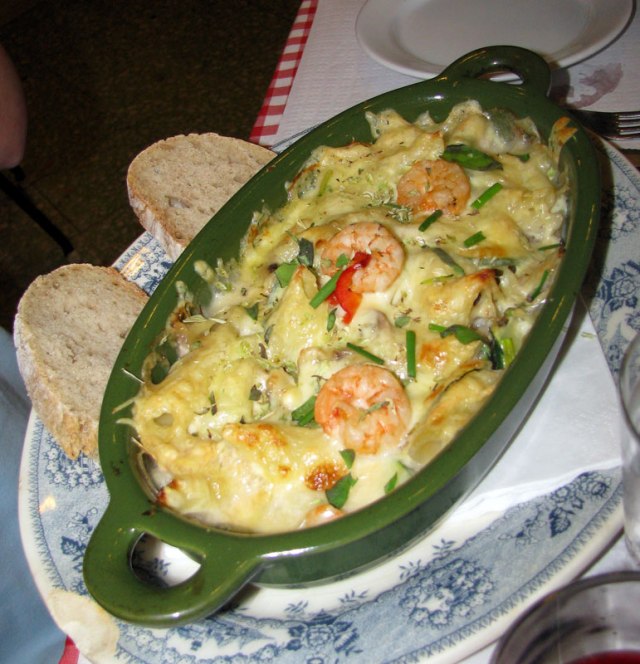 The staff were great – friendly and amusing – and obviously proud of their little gem to which people travel far and wide to visit.

Pudding was an easy choice for me – as the magic word ‘Tiramisu’ was on the menu! It didn’t disappoint either – it was light and moist and wonderful!

The Pizza Pazza is open from Tuesday to Saturday at 6pm, and on Sundays they open at 1pm. They didn’t seem to have a published closing time – and knowing the laid back style of the venue it would probably be open until the last person was full up! Just one thing to note – unlike the restaurant on site – they don’t accept bank cards – it’s cash only for payment.

Our meal for four – including a jug of house wine, starter bread, main courses and three desserts – cost 58.40 Euros.

Overall we had a great evening, surrounded by friendly people, eating good simple food which was well-cooked and well presented. We left full and happy!

This entry was posted in Eating out and tagged eating out, Food, reviews. Bookmark the permalink.

19 Responses to Eating out in Pedralva – Pizza Pazza