J is for José

Posted on July 5, 2012 by Alyson and Dave Sheldrake

“Please don’t call me arrogant, but I’m European champion and I think I’m a special one”

José – or for his full name – José Mário dos Santos Mourinho Félix – ‘the Special One’ has to be one of the most famous Portuguese men on the planet! He’s also rather good looking so I think I am going to enjoy writing this A to Z of Portugal post!

Best known for his managerial roles in football, José started out as an interpreter for Sir Bobby Robson, at Sporting Lisbon and Porto and then at Barcelona. As a manager he has been most successful at Porto and Chelsea and he is now weaving his magic at Real Madrid.

His father was a famous goalkeeper and manager, and it would seem that José learnt all about the harsh realities – and fragile existence – of the life of a football manager very early:

“I was nine or 10 years old and my father was sacked on Christmas Day. He was a manager, the results had not been good, he lost a game on December 22 or 23. On Christmas Day, the telephone rang and he was sacked in the middle of our lunch”

José displayed an unusual single-minded belief in his own abilities – and was also very determined to be successful – he quit just one day after he was enrolled in business school by his mother, wanting to prove he could make it as a football manager. And he has certainly proved that he made a wise move there.

Famous for having a book full of notes and tactics for each game, José plans meticulously and carefully – the game of football is far more than the 90 minutes on the pitch for him:

“When I go to the press conference before the game, in my mind the game has already started”

Master of the unusual press quote

In January 2007, after the transfer window closed, and beset with injury worries, José was unable to bring in more players to bolster the squad. His response?

“It is like having a blanket that is too small for the bed. You pull the blanket up to keep your chest warm and your feet stick out. I cannot buy a bigger blanket because the supermarket is closed. But I am content because the blanket is cashmere. It is no ordinary blanket”

He was also famously asked by a Ghanaian journalist if he ever phoned Roman Abramovich to see how he was – his reply was “Would you phone the president of Ghana?”

Famous for wearing a stylish – if a little eccentric – coat on the touchline at Chelsea – well it is a lot colder in Britain than in Portugal! – he later donated the coat to the Tsunami relief charity, raising £22,000 for them. He has also been involved in supporting a youth project aimed at bringing Israeli and Palestinian children together through football.

There is another reason for this post – a local connection to the village of Ferragudo which we love so much. José’s dad was born in Ferragudo – and has a house here now.

There’s a wonderful local story – probably the work of myth and legend – but still worth sharing with you!

Fact or fable – who knows? But it’s still a good story!

The other story to share with you is definitely true – because it’s my claim to seeing José!

We have holidayed here in Ferragudo a lot over the last ten years, and we have always visited the same cafe in the square, run by João and Marina. One year, when José was still Chelsea manager, we were sat having a coffee and João teased us that we had just missed José having a coffee at the next table to us. Yeah right, we thought, and laughed it off.

We went back a couple of mornings later, and sat having another coffee. I was aware of a group of men sat behind us, but didn’t look round much – I did remember thinking ‘ooh someone’s wearing an amazing aftershave!’ but didn’t think any more of it – they left, and then João came bounding over – ‘did you see him, José was sat right behind you’ – Damn! Missed him again!

The next morning we got up a bit earlier – wandered down to the square, sat at the cafe – and there he was, happy as you like, sat at a table, sipping coffee and watching the world go by. He was trying to hide with a baseball cap on – but was far too good looking and charismatic to go unnoticed! He was very lovely to children asking for his autograph, but everyone else left him alone, which I am sure he was pleased about. So finally, when João came over – we had to concede defeat and agree that he did indeed have the mighty José as a regular customer! 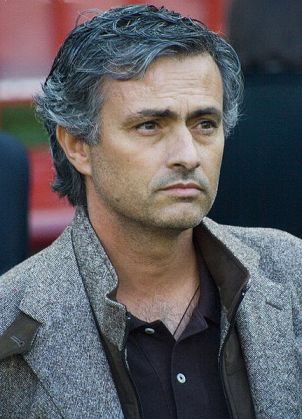 So – like him – or not – he is a real character in football – and a bit of a legend in Portugal too. And surely one day he will manage the Portuguese national team – and I have no doubt he will lead them all the way to European victory. And for now – he fits nicely into my Personal A to Z of Portugal 🙂

This entry was posted in About us and tagged Ferragudo, Portuguese people. Bookmark the permalink.

12 Responses to J is for José