B is for Birds

Posted on January 15, 2012 by Alyson and Dave Sheldrake

“Birds are a miracle because they prove to us there is a finer, simpler state of being which we may strive to attain” Doug Coupland

It is very early – still dark outside – and I am lying in bed listening to the beautiful sound of a Blackbird singing.

The sound evokes wonderful childhood memories for me. We always had a Blackbird in our garden (the same one of course for my entire childhood!) that we named ‘Charlie’; along with a whole host of other garden birds – Thrushes, Blue Tits, Great Tits, and a particularly tame Robin. As an adult in the UK, a bird feeder was a must-have garden accessory.

The classic “British” birds – or so I thought! I have to admit to being surprised – and very pleased – to find that so many of my old feathered friends also cross the Bay of Biscay – and have a holiday home in the Algarve!

As you’ve probably already gathered from the above naïve confession – I am no ornithologist! But I have a soft spot for birds of all kinds … well I married a man with the surname ‘Sheldrake’ – so what can you expect!

Our neighbour’s garden has a beautiful tree that overhangs our plot (thank you!) and this is home to our pair of Blackbirds, who seem to be singing non-stop at this time of year, much to my delight. I’m reminded of the Beatles song: ‘Blackbird singing in the dead of night…’ – who would have thought they would sing so wonderfully in the early dawn. 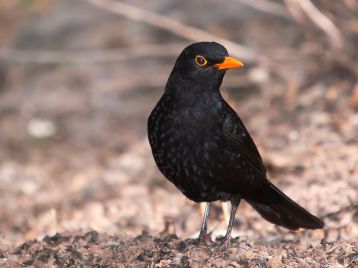 But it’s not just Blackbirds in our garden – I have spied Robins, Blue and Great Tits – and even a Chaffinch (haven’t seen one of these in the UK for years!). Nearby neighbours also have a kit of Homing Pigeons; that swoop around the rooftops in the late afternoon sunshine.

Our house is on the top of a hill, and at sunset every day the sky is suddenly filled with birds flying ‘south’. They are mainly Seagulls; but the dark specks, often flying in remarkable V formations, are wonderful to watch. I’ve even had to literally ‘duck’ (sorry!) to avoid a particularly low flyer on several occasions as I have stood on our balcony!

We have had to have our chimney pots covered over with a fine mesh to stop the House Martins from nesting in them. The first spring that we holidayed in the house, we knew we had a problem as we listened to the cheeping of new babies – coming from above our boiler! Suffice to say – not a happy ending!

We are also close neighbours to a very loud and ebullient Cockerel – forget the fairy story of the Cockerel waking up with the dawn – they often start at 2am! This one is fantastic – he always crows when we are sat having lunch outside, usually resulting in me choking on my food with laughter – as he has an ‘unfortunate’ crowing noise – he sounds constipated! Guaranteed chortling every time I hear him… I am such a child!

Previous readers of this blog will know that I am fascinated by the White Storks that nest on chimneys and buildings across the Algarve – Silves is a particularly good place to see them in all their glory.

But thanks to a recent BBC programme called ‘Earthflight’, I now know so much more about them!

The White Storks are magnificent – they measure on average 100–115 cm from beak tip to end of tail, with a 195–215 cm wingspan and a standing height of 100 – 125cm; and they are quite magnificent to see in flight, swooping over the rooftops.

But I didn’t know that they fly all the way from the African continent – mainly South Africa – all the way to Europe – via Istanbul – to nest here. That’s nearly 17,000 km – and takes them an average of about 50 days to complete!

I am slightly concerned that according to Wiki the birds return north in the spring, arriving back in Europe in late March / April… however we have had the storks arriving back here since November – I wonder if the milder climate has confused them? 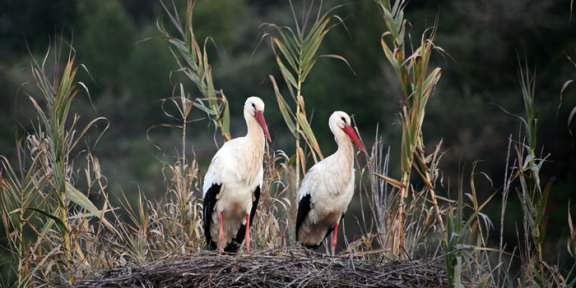 I love the fact that the nests you see all over the Algarve are actually ancestral homes – and that storks return to the same nest year after year to mate and bring their young into the world. They do not pair for life as legend would have us believe, but they are monogamous; and I think that they often have the same mate for a long while.

At nesting time apparently the males arrive first – and have the job of tidying the nest and making sure all is ship-shape before their partner arrives (wonderful – must remember that one!) The females take longer to arrive (uh-oh I can hear a muttered ‘that’d be about right’ from behind me!) – and the males have an anxious wait before their partners arrive – I guess being blown off course is a flying hazard when you rely so much on thermals to get you from A ~ B.

On arrival, the happy couple then great each other with that staggering ‘head back’ full-on clacking noise – that sounds a bit like an old wooden football rattle (no I’m not old enough to remember them – I’ve just been told about them!). The pair have been apart for eight months in South Africa – which I found an interesting quirky fact – what do they do in their separate male/female worlds all that time?! The only way to tell them apart is that the male will be slightly larger than the female – and they are a gregarious bird – we often see flocks of them flying together.

According to Wiki (link) each year the female can lay one clutch of usually four eggs, which hatch at different times 33–34 days after being laid. Both parents take turns incubating the eggs and both feed the young. The young leave the nest 58–64 days after hatching, and continue to be fed by the parents for a further 7–20 days. 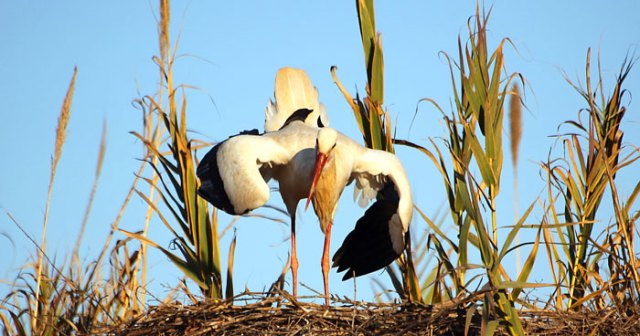 Seagulls – with their soaring child-like cries – continually paint our skies with colour and life. Down at the local harbour I can happily while away an hour watching them ‘fishing’ in the water; their sudden frenzied descent into the water, surfacing with the latest catch dangling – only to be immediately attacked by at least four other birds who are very happy to steal the spoils. They make for a great subject for a photographer though:

They are often so lazy too – they spy you coming toward them and just waddle away a few feet then stand looking at you again – defying you to come any closer. You should realise at this point that at heart I am still only five years old … so ‘gently’ chasing them along the edge of the harbor wall until they finally – with an almost perceptible deep sigh – fly off across the water – is great fun! You can almost hear the groan of effort as they finally succumb to flight! 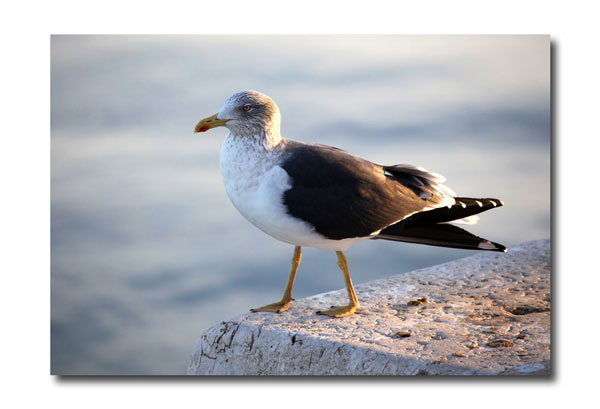 One of my favourite birds to watch are ducks. They are so expressive and characterful – and if you sit quietly enough (unusual for me, I know!) they will often eat of your hand – literally!

We recently discovered the beautiful little village of Alte nestling in the foothills of the Serra do Caldeirão – with a pretty little river walk which is home to an absolute treasure of little ducks. 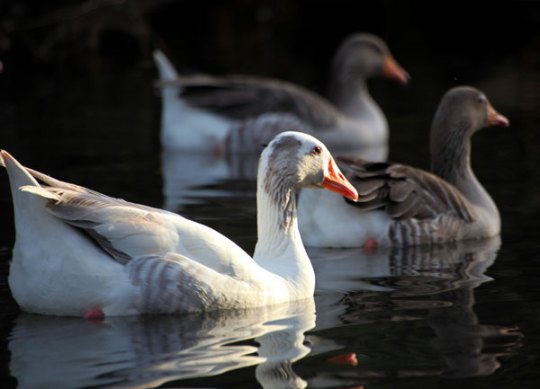 And thanks to RestlessJo – who has impeccable timing – who has posted her A is for Alte post this morning on her My Personal A ~ Z of Portugal -so if you would like to find out more about this appealing little village please check out her link – there are some delightful pictures there too!

Next time you are thinking of doing something different – why not take some food with you to the river – and enjoy the antics of the ducks!

Our final birds to share with you are actually a bit of a mystery to me – I think they are a breed of Plover (?) – so if anyone knows what they are or anything more about them – please let me know!

Dave spent some time photographing them recently down by the shoreline at one of our local breakwaters – every time the tide came in they would scurry back on the rocks out of the way of the incoming water – and then skip back down to the edge to feed. They are both beautiful – and comical – little things – and they certainly made for a great photograph – or three!

You can see more of Dave’s photos on his Facebook page –  and the majority of the photos on this blog are usually Dave’s – although I do sneak some of mine in here sometimes!

We live in a beautiful part of the world – the river Arade near us is an amazing little protected haven for birds of all kinds – we regularly see Herons wading through the low tide; and the Ria Formosa natural park in the Eastern Algarve is home to over 100 species of birds, including Flamingoes, Egrets and the Purple Swamphen – which is the adopted symbol for the park. The Ria Formosa is home for over 20,000 birds during the winter season.

I may not know very much about many of the birds here in the Algarve – but I do know where I would like to visit now to find out more… and I do know what I like – and the sound of our Blackbird singing in the tree is just heavenly! Now… where did I put those binoculars?!

This entry was posted in Algarve and tagged birds. Bookmark the permalink.

22 Responses to B is for Birds