The 12 days of Christmas – Portuguese style

Posted on December 23, 2011 by Alyson and Dave Sheldrake

“Christmas is taken very seriously in this household. I believe in Father Christmas, and there’s no way I’d do anything to undermine that belief” Carol Ann Duffy.

We are often asked what Christmas in Portugal is like – and in many respects it is similar to the UK – but there are also differences, so I thought it would be fun to look at the 12 days of Christmas – Portuguese style! so, here goes, counting backwards, same tune…

As a Catholic country, there is one thing that you are guaranteed to find everywhere at Christmas time in Portugal, and that is a nativity scene (called a Presépio) Some of these are extremely elaborate and beautiful, and many shops and restaurants proudly display a nativity scene in their window:

Many towns also have a giant life-sized display in an empty shop, like this year’s nativity in Portimão. 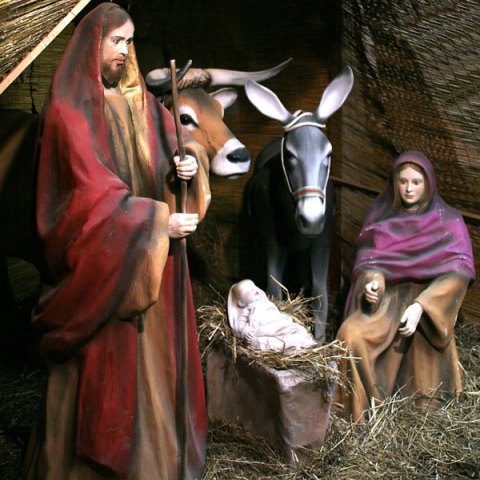 We have also travelled to small villages and been amazed to find intricate and amazing nativity scenes – here is the one on the roundabout at Alte:

For the traditional Catholic believer, on Christmas Eve, people will go to church for the ‘Missa do Galo’ or ‘Mass of the Rooster’ service; where the image of the baby Jesus is brought out and everyone queues up to kiss it, before it is placed in the nativity scene.

Another tradition you will see everywhere is Santa Claus – usually to be found scampering up the side of a building or patio – and known as Pai Natal. It must be confusing to be a small child in Portugal though as tradition says that the presents are brought by the newborn Jesus – the ‘Menino Jesus’ – so I am not sure what role Santa actually plays out here – he always looks like a burglar to me!

We have seen some Santa’s grottoes this year too – here’s the friendly Santa in Portimao who was very happy to have his photo taken!

Now this is one of my favourite things about Christmas in Portugal – this was the beach at Prainha yesterday – miles of golden sand, glistening in the sun, and calling out for you to come and paddle at the water’s edge, and enjoy a leisurely walk:

There are so many beaches along the Algarve – if you know where to go, you can find peace and quiet even in August – but at this time of year you are spoilt for choice. Crashing waves, huge blue skies, soft sand, and some haunting seagulls are often your only company.

Christmas definitely means presents in Portugal – even in a recession. According to the Deloitte Christmas Survey 2011 the Portuguese are reputed to be intending to spend, on average, about 530€ each this Christmas. 88% of Portuguese people believe that their country is in a recession. The Portuguese wage packet traditionally includes a ‘Christmas bonus’ and this year (for public sector workers – I am not sure if this is for all employees?) this is being taxed at 50% – and then the remainder is taxed again at a further 25%. There is definitely less money around, rising unemployment, and many of the shops have sales on already. But there will still be presents under the tree, although I think people are being more cautious and price-savvy. Another difference here is that traditionally presents are exchanged on the 24th December at midnight.

Interestingly, one of the casualties of the recession appears to have been the wonderful street lights and displays we have always enjoyed here in the Algarve. These were the beautiful angel lights we saw in Lagoa in 2008:

This year, it has been a much more subdued affair, with a few lights hanging from lamp posts here and there, and the odd display in a town square. It certainly doesn’t feel as Christmassy this year. 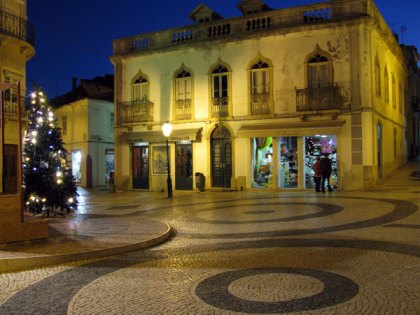 There have been some lovely little street markets this year – complete with stalls selling local produce and crafts, roasted chestnuts and sweet pastries, mulled wine, and musical entertainment. Christmas seems less ‘corporate’ in Portugal, and far more about local initiatives and local people coming together.

Christmas day is all about families and friends coming together – the traditional meal is Christmas Eve – so Christmas day is a chance to roast a big meal and spend time together – but not necessarily a roast turkey. It’s as likely to be rabbit, duck, pork or lamb; and every house will have a rich table laid full of traditional food, cakes, nuts and sweet pastries.

Another very traditional desert is the “Bolo Rei” (or King’s cake) “which is a round-shaped cake with a hole in the middle, made with soft white dough, nuts and raisins, and decorated with crystallised fruits and dried fruit: 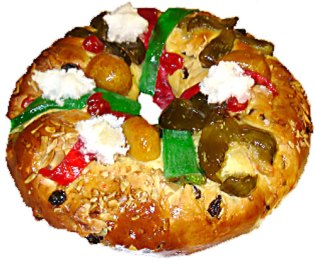 The cake was first made at Lisbon’s ‘Confeitaria Nacional’ cake shop in 1870.  It was originally inspired by a cake whose origins were rooted in the Roman empire and celebrated the New Year and the coming of the Three Wise Men. Traditionally a small gift – or a fava bean or broad bean – was hidden in the cake, and whoever found the bean was considered to be ‘King’ of the celebration or festivity. Nowadays, tradition has it that whoever finds the bean has to buy the next Bolo Rei cake – although I think Health and Safety may well have banned the bean from commercial cakes?

There are a couple of schools of thought on the origin of the gift – depending which religious or pagan angle you wish to consider:

The Romans had a tradition of selecting a ‘King’ for the pagan festival of Saturnalia – which was then adopted by the Christians and became our Christmas.

Or – legend has it that as the Three Kings followed the Star of Bethlehem on their way to greet the baby Jesus, they could not agree amongst themselves which would be the first to give their gift to Jesus. On their travels they met a baker who gave them a loaf of bread with a broad bean hidden inside it. He told them that the one who ended up with the slice of bread with the bean inside should give baby Jesus the first present and they accepted this idea as a means of resolving their dispute.

Another casualty of the recession appears to be Christmas trees – there are definitely less trees around this year. In Portimão though, most of the shops all appear to have clubbed together and they all have matching white Christmas trees displayed outside – all decorated individually and lit from inside the shop: 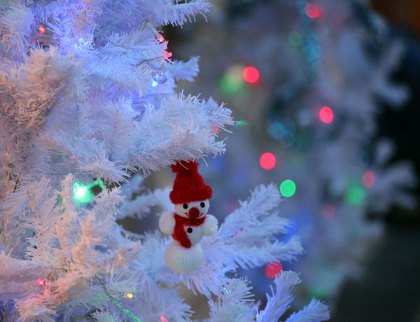 Since the time of the European discoveries of the New World, the Portuguese have been fishing for cod in the waters of Newfoundland. The codfish were processed and salted on the boats to preserve them until they returned to Portugal, then dried in the sun and sold.

Bacalhau – dried and salted codfish – is a staple part of the Portuguese diet, and a strong traditional meal prepared on Christmas Eve. The dish is popular in Portugal and other Roman Catholic countries, because of the many days (Fridays, Lent and other festivals) on which the Church forbade the eating of meat, and Bacalhau dishes were eaten instead.

Photo credit – by Karl Ragnar Gjertsen – with thanks

There are reputed to be over 365 ways of cooking the fish, and we are intending to try ‘Bacalhau com nata’ this Christmas Eve – we shall be cheating a bit and buying Riberalves, which is Bacalhau where the salt has already been removed – and you can buy it in packets in the freezer at the supermarket – which will save two or three days of soaking!

And with special thanks to Piglet in Portugal for this Bacalhau recipe! (link) – we’ll let you know how it tastes!

Christmas Day and New Year’s Day are obvious public holidays in Portugal – although unlike many other countries, Boxing Day is a normal day here. Portugal currently has more bank holidays than the UK overall, but with the austerity measures, the Prime Minister is considering moving some of the traditional bank holidays that fall in the middle of the week to an adjoining weekend. He is also negotiating with the Catholic church to ‘give up’ four bank holidays from 2012 onwards – with 2 national and 2 church days being removed.

…And a sun shining in the blue sky

And that’s the main reason for enjoying Christmas here! The weather forecast for Christmas is glorious – bright sun, 20 degrees and blue skies … and at this time of year the sunsets are truly amazing:

So, wherever you are, and however you may celebrate Christmas, may we wish you a ‘Feliz Natal’ and ‘Boas Festas’ from Portugal.

If you have enjoyed this post, you may also enjoy:

Sunshine in my soul

Shopping in the Algarve

This entry was posted in About us, Algarve, Events and tagged Bacalhau, beaches, Christmas, days out, Food, Sunshine. Bookmark the permalink.

41 Responses to The 12 days of Christmas – Portuguese style