A different window on the BLIP exhibition

Posted on October 9, 2011 by Alyson and Dave Sheldrake

“Doublethink means the power of holding two contradictory beliefs in one’s mind simultaneously, and accepting both of them” George Orwell.

BLIP (Better Living In Portugal) exhibition – well it was free so we thought we’d go along… it was what we expected really, usual stands and stalls, free sweets, free prize draws, free bag, and not a lot else really! We met a lovely couple setting up a new free voucher web-site and good luck to them… link here  .. they were sparky and cheery and genuinely interesting. But other than that, well it seemed to revolve around one of the following categories:

No? Well – then there’s probably not a lot here for you.

But I had to post this to share a mildly amusing conversation we had with one of the stall holders, selling triple glazing, which went along these lines:

Q         ‘Did you know you can now have triple or even quadruple glazing, and soon double glazing will be obsolete?’

I’ll save you the long middle bit where we were shown LOTS of different versions of this…. and one with double glazing on the outside, then a single bit in the middle, and then another double bit on the inside… VERY security conscious:

Hubby  ‘So what happens if there’s a fire then and you need to get out of the house?’

Hubby  ‘Isn’t that, well, a bit dangerous then?’

A          ‘Oh no, in Germany it is the law that all fire engines must carry special equipment to break such glass. You just stay in the house until they come.’

Hubby  ‘Right, erm, but this is Portugal not Germany. Do the Portuguese have the same equipment?’

A          ‘But I know of a house in Portugal where there was a fire and the fire brigade came expecting to bring out the charred bodies… and they were all still inside and ok, the glass had saved them…’

Hubby  ‘How did that happen then?’

Hubby  ‘OK that’s great but what if the fire had been inside the building?’ 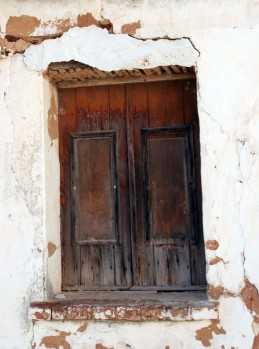 “There are some ideas so wrong that only a very intelligent person could believe in them” George Orwell.

This entry was posted in About us, Events and tagged days out. Bookmark the permalink.

2 Responses to A different window on the BLIP exhibition